You may be wondering what the food is like in Moldova. I’ve already mentioned the amazing Gagauz kivirma and the Ukrainian borscht, but today for lunch, I had solyanka, a thick, spicy and sour Russian soup offering a mix of fresh and cured beef and pork. It has become my favorite. I’m not sure I’ve seen or eaten it’s equal anywhere in Chicagoland. 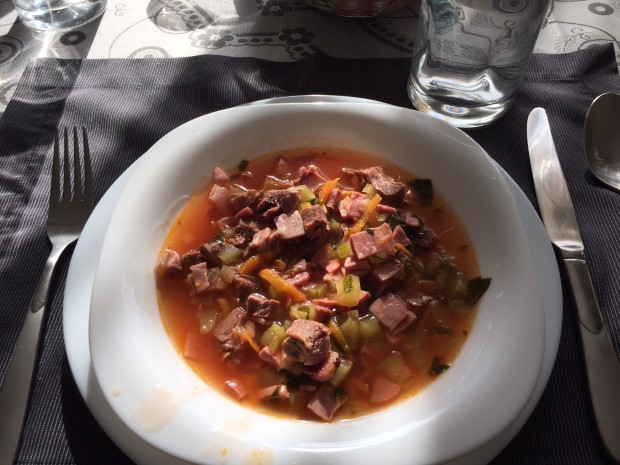 Soups are always given before the main course, which in this case was baked turkey with plenty of vegetables.

While Moldova is not exactly a major destination for tourists, it does boast for having the two largest underground wineries in the world. I had a rare afternoon free to visit the Cricova Winery, just outside Chisinau. Cricova is not only famous for its wines, but during World War II, it became a hiding place for Jews, in wine barrels, during the Nazi invasion of the Soviet Union.

Cricova has over 60 miles of tunnels housing 1.25 million bottles of over 653 different kinds of wines.

Among the elite guests besides myself, have been the Russian Cosmonaut Yuri Gagarin, Brejnev, Gorbachiov, and Putin. Secretary of State John Kerry also visited recently.

The oldest bottle of wine in this labyrinth of subterranean passageways is a 1902, “Jewish Easter Wine” from Jerusalem. An offer of $150,000 to purchase was declined.

Just so you know, I by-passed the wine tasting opportunity…