In 1863 American poet Henry Wadsworth Longfellow penned a poem after his son Charles left home without his father’s blessing to join the Union Army during the Civil War.  Charles was severely wounded during the Battle of New Hope Church in Virginia.

“I heard the bells on Christmas Day, their old familiar carols play, and wild and sweet the words repeat of peace on earth, good-will to men!…

Till ringing, singing on its way, the world revolved from night to day, a voice, a chime, a chant sublime of peace on earth, good-will toward men!

Then from each black, accursed mouth, the cannon thundered in the South, and with the sound the carols drowned of peace on earth, good-will toward men!

It was as if an earthquake rent the hearth-stones of a continent, and made forlorn the households born of peace on earth, good-will toward men! 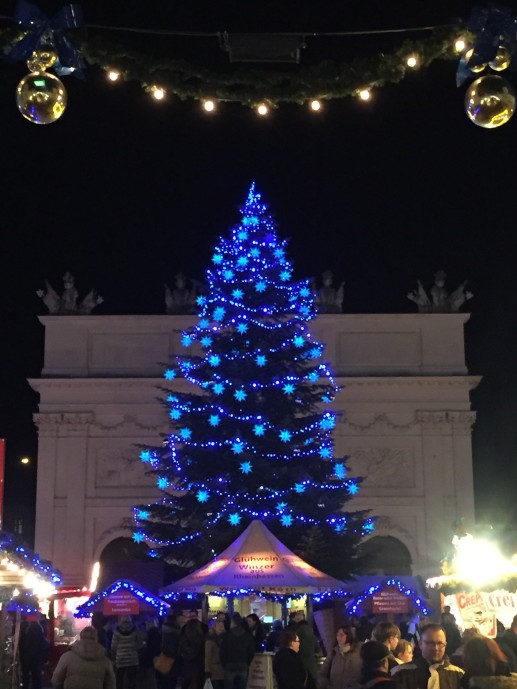 I just returned from Potsdam, Germany, just outside of Berlin.  I was there connecting with our church-planting partner Steffen Weil and the team at the Mittendrin church.

It was my first time being in Germany during the Christmas season.  I enjoyed walking through the packed “Christkindlesmarkt” in the heart of Potsdam, taking in the amazing lights, booths stuffed with goods and ornaments, and of course food that was simply, “wunderbare”.  Germans know how to celebrate!

But then, five days after my return to Chicago, a truck deliberately plowed into a similar scene in Berlin, killing 12 and injuring dozens in a terrorist attack.

The Bible does not sugarcoat over the fact that the world in which we live is broken.  Just a few pages in, we discover that.  But we also discover in those few pages in…God’s plan of redemption through the One promised to come as our Savior.

Longfellow closes his poem with these words;

“Then pealed the bells more loud and deep: God is not dead, nor doth He sleep; The Wrong shall fail, the Right prevail, with peace on earth, good-will to men.”

Luke writes, “And the angel said to them, ‘Fear not, for behold, I bring you good news of great joy that will be for all the people.  For unto you is born this day in the city of David a Savior, who is Christ the Lord.'”

Christmas is a precious, sacred, and usually joyful time of year. However, whether they are serving here, near or far, Christmas can be a challenging and emotional time for cross-cultural workers. Distance can mean separation from family, friends, and beloved traditions. Loneliness and isolation can be excruciating and discouraging. Ministry opportunities that the season creates, while wonderful, can lead to busyness, exhaustion, and little space for personal reflection. For some, Christmas is not even celebrated in the country where they serve. 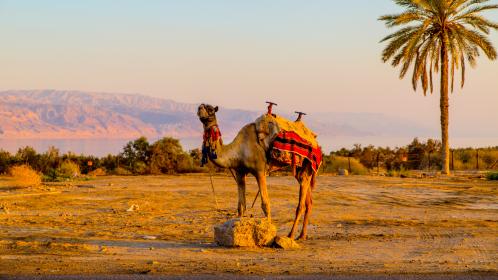 While this view is perhaps more biblically accurate, it is not what most of our Global Partners probably grew up seeing on Christmas morning…

If you have a relationship with one of our Global Partners, please take a moment to send them an email or text. It doesn’t have to be long. Just let them know that you love them and are thinking of them. Being remembered is a powerful encouragement.

For all of us, we can take a moment from our own preparations and celebrations to support our Global Partners in prayer. TEAM, a missions sending agency, published a wonderful Christmas Prayer Guide, listing six important areas where we can intercede for them during this time of year. https://team.org/blog/wp-content/uploads/2016/12/Holiday-Prayer-Guide.pdf

Please take a moment to lift up our Global Partners this week. Pray that He would fill each of them with His light. And, like the star that lead the outcast shepherds and foreigner magi to the stable, pray that that Light would continue to draw many to Himself. 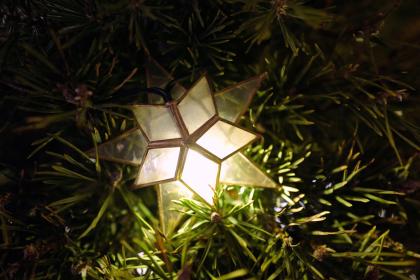 CompassGlobal’s Executive Director Rick Pierson’s current series of posts reflects on his trip to Belgium just this last September. This past week we received a visit from Olivier Jonkers, one of our supported Global Partners in Belgium. Olivier and his wife Karin are Belgian nationals, and serve with Reach Global planting churches in Brussels. Evangelism and church planting is a challenging task in Belgium, where according to Operation World, the population is only 1.2 % Evangelical/Pentecostal.

Late in 2013 their small congregation received abrupt notice that they could no longer use the facilities that they had been renting for meetings. However, this forced move helped them to determine that the city of Nivelles, just outside of Brussels, was an even better location. It is not only central for their members, but it is a city with no Christ-centered church. 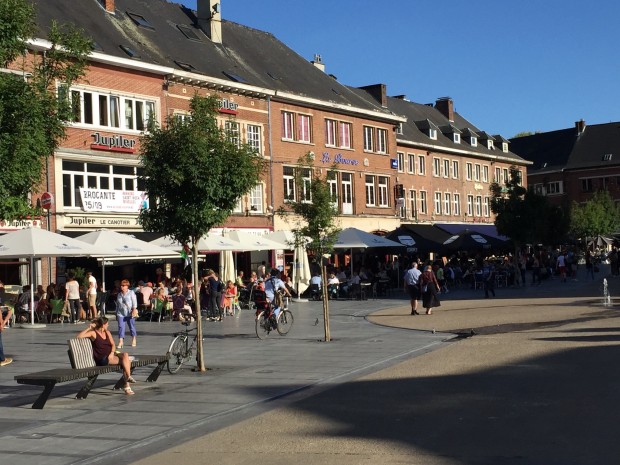 The beautiful city of Nivelles

Over the next 8 months, many doors were opening for the congregation to rent a building in Nivelles. It was an exciting season of seeing God move. Yet at the very last minute, everything fell through. Though deeply discouraging, the roadblocks drove the congregation to prayer and cling to the faithfulness of God. They were being reminded that their focus was to be on people needing God, not bricks. In spite of the challenges, their congregation became even more unified with the resolve to reach people for Jesus Christ. Their home groups continued to grow, baptisms multiplied, and care for the poor became real.

In later weeks, they learned that the building they had hoped to rent, used to be called Le Phare (The Lighthouse) in the 1920’s. Le Phare is the name of their church! Recently they have felt called to pursue not just renting the building again, but purchasing it! And despite the challenges of the last year that may cause them to shrink back from such an endeavor, they are stepping out in faith once again. In the mean time, they have rented a small store front only a few buildings down the street. Named “Le Puits” (The Well) , the church has made it a place for outreach to the community. 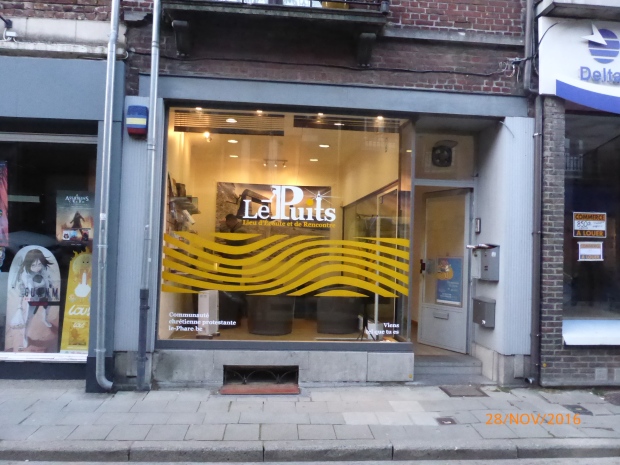 I wish everyone could have participated in our meeting with Olivier. It was faith building to hear and see God’s hand at work both in the good times and in times of trials. It was inspiring to observe the sacrificial faith of the congregation of Le Phare and the Jonkers family. Please pray for the Jonkers, for Le Phare church, for the city of Nivelles, and for Belgium!

Mark Twain’s collection of essays on “Christian Science” prompted a lot of discussion in my family. Up to that point, we had never thought to think about whether what we believed was true or not.

Samuel Clemens, an agnostic at best, probably never anticipated that his treatise would be “borrowed” from the Peoria, Illinois public library some 100 years later by a family who just assumed that it would be a good read about the religion they followed.

Instead, his wit, humor and hostility toward Mary Baker Eddy opened a doorway to us that we had never explored before.

Soon after the Twain discussions, a large outdoor advertising board was built along the highway near our home. We passed by it everyday. It contained a simple message: “Christ is Coming…Are You Ready?” Behind the print were ominous clouds…but no other words…there was no church or organization listed.

I remember asking my dad what it meant. He didn’t know. The “Christ is Coming” part of the message didn’t sound so bad…it was the “Are You Ready?” part that was a bit unnerving. Ready for what?

Twain and the billboard eventually led me to read the Bible for the first time apart from the “Science and Health”. I read though the gospel accounts over the course of a few days. Lights turned on.

Jesus Christ revealed Himself to me through His Word…I’ve never looked back. Funny thing…after my family and myself placed our trust in Jesus as our Savior…a storm blew that sign completely over…it never was repaired.

Maybe it was there just for us?

The first article in this blog series was originally posted only in part. The full version is now available.

Standing in the Nave at the Collegiate Church of Saint Gertrude in Nivelles, Belgium (see previous post), looking at the isolated figure of “God on the cross”, thinking of my deserved place directly alongside…brought me back to my journey toward Him.

I was raised as a Christian Scientist. I was actually proud of it…not so much for what I was taught or what I thought I believed…but more so for the mystery and prestige of it.

None of my friends had heard of Christian Science..they thought being a “scientist” was cool as I explained it to them. After all, how could it not be for one to believe that there is no sin, sickness, disease or death?

But it took me far away from God…even though we talked about God all the time. 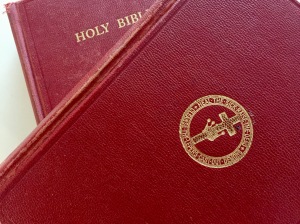 While I won’t get into the details of what Christian Science believes, I was brought up to read the Bible (King James Version) and “The Science and Heath with Key to the Scriptures by Mary Baker Eddy”. The books pictured above are the set that I have had since I was very young.

I was taught never to read the Bible by itself without reading the Science and Health. After all…contained in it was the “key” to the Scriptures. It unlocks the truth of the Bible…

…but actually…it kept me from seeing truth. 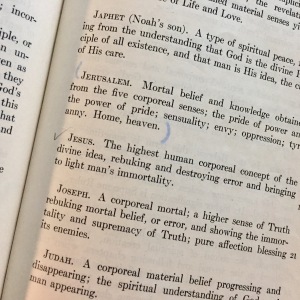 Anything that was read in the Bible did not take on literal meaning. The extensive “glossary” reveals what names and words in the Bible “actually” mean. So was Jesus God in flesh? No…He is the “highest human corporeal concept of the divine idea, rebuking and destroying error and bringing to light man’s immortality.”

That’s what I thought about Jesus 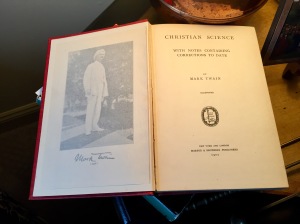 Thankfully, He didn’t have a misunderstanding of me! And while I was hardly aware of it at the time, the providence of God was at work. He was pulling me toward Him…clearing away the rough places…making them a plain…so I could walk toward Him.

Of all things, He dropped a book by Mark Twain into my life. My mother had “borrowed” it from the Peoria Public Library (she didn’t have a library card). But it was that book that paved the initial pathway…that caused me and my family to question Christian Science for the very first time. Twain’s wit and first hand personal knowledge of Mary Baker Eddy, prompted us to search for the truth.

Funny how God works. As much as we sometimes lament over the darkness of the world…as much as I thought about the challenge to plant churches in Europe…

…God is at work…even in some of the most unconventional ways.