For the last few weeks we have looked at ways that the Gospel is being proclaimed in word and deed throughout the Latin America/Caribbean region. Did you know that the Gospel is also going out from this region to the rest of the world in big ways?  For example, according to this article from Christianity Today, Brazil sent out 34,000 missionaries in 2010. This makes it the second highest country for missionary sending in the world!

Praise God for our brothers and sisters in Brazil that are sending and going in order to take the Hope of the Gospel to the world. Let us pray today that God would bless their lives and work!

For more on how the Gospel is going from everywhere to everywhere check out this post.

This week’s post comes to us from Mark and Meg Kuzdas who serve in Costa Rica. Prior to moving to Costa Rica, Mark and Meg attended The Compass Church, and were very involved as leaders in the youth group. Mark sent us a testimony written by a young woman named Debra (name changed for privacy).

Mark writes, “Debra’s home was one of those that we visited very early on as we started the ministry after language school in 2003. We are very proud of her as she has graduated high school and is in her second year of college.”

One day my family and I moved to live in Los Guido. Mark and Meg came to our house and invited us to go to church. My mom took us to church and we continued to go each Sunday. A short time later Mark asked my brother, sister and I if we would like to be a part of a discipleship group and we said yes.

I was 5 years old when I started in my discipleship group and loved it. When I was going through the second book I began to understand that Jesus died and rose again for me. Mark asked if I wanted to accept Christ as my Savior and I said yes and prayed. Some time later I learned to really love teaching others all that I had learned and was learning as I became a teacher in my own discipleship groups. Eventually I became a youth leader in the church.

The Lord provided a huge blessing for me in 2015 when I was able to go to Nicaragua on my first missions trip. It was so exciting! I wanted to go and be part of the team that was teaching the Word of God. I had been taught and learned that Jesus died and rose again for me and I wanted to teach others the same thing and also help in whatever I way could.

After we returned to Costa Rica, Mark asked those on the team who would like to return to [Nicaragua] on another missions trip. Of course, I said I did and have been back several times! I look forward to going again [this year] to not only share more from God’s Word but also to teach music which is one of the gifts that the Lord has given me.

Today I am one of the teachers every Sunday in Sunday School and part of the worship team where I play the keyboard, flute, and sing. I am a teacher in the discipleship groups and I teach music classes. I work in the kitchen of the …. feeding center every [week]. I continue to help and serve in any way I can.

Praise God for the work He has done in Debra’s life! Pray today for Debra that she would continue to be used by God to share His light in her country and beyond. Pray also for Mark and Meg as the continue to serve faithfully.

Reading the news these days can be a scary business. Violence, injustice, poverty,  the list goes on and on. In response, many may place their hope in good deeds, scientific advancements, or politics. Yet none of these can truly overcome evil.

As followers of Christ,  we can live with peace even in the darkness, for we know that the battle has already been won. This past weekend we celebrated our salvation in the death and resurrection of Jesus. This is the true hope of the world.  It is a “a living hope  … an inheritance which is imperishable and undefiled and will not fade away,” (1 Peter 1: 3-4).

The world is desperate for this Hope.  May we go forth and share it hear, near, and far.

Today’s post is written by Tim Navratil who serves with his wife as the Area Leader for Latin America/Caribbean with ReachGlobal.

Last March I traveled to a remote part of the Peruvian Jungle.  I found out that the jungle there can be described in three ways.  The lowland jungle that most of us think of when we hear “jungle” where the waters flow slowly and the trees are thick and the air is heavy with bugs and humidity.  The highland jungle is high in the mountains where the rivers begin.  The middle jungle is where I traveled.  There the rivers run wide and fast, are bounded by rocks and trees and the air is a bit less humid.  The road to the villages we visited was narrow and mostly gravel with several rivers we had to ford.  One river we drove through for about 100 yards, part of the time running down the middle of the river.  That was a bit exciting.

The people we visited are called Yanesha.  They are a native people to that part of Peru.  They live on a government reservation comprised of about 48 communities.  I was tagging along with a church team that taught English at a middle/high school in the town of Shiringa.  We spent several days teaching English and playing games with the students.  Each year our ReachGlobal missionaries in this area host mission teams to teach ESL in quite a few schools in the area.

This year there will also be construction teams coming to minister among the Yanesha.  They are helping to build a ministry and training center to help teach the young pastors and lay leaders in the communities.  The church was planted among the Yanesha by Wycliffe and they even have a New Testament in their language.  Unfortunately, the churches spiritual health has deteriorated over the years and there is a real need for spiritual and theological training.

A few months after I visited Shiringa, I read an article on the internet about a 73-year-old woman who had been accused of witchcraft in this village.  She was thought to have been bringing curses on several villagers and making them sick.  This poor woman was burned alive at the stake.   Over 40 people in this village voted to give her the death penalty for her wrongdoing.

One of the church leaders among the Yanesha recently was ill and after receiving prayer from our missionaries went to visit a shaman.  This unfortunately is not uncommon among these tribal people.  There is a great need for training and prayer for understanding the spiritual forces at work among them.  I am excited to be part of another team going back to the Yanesha in the Spring of  2017.  One of the team members is going to be teaching for three days on the topic of Spiritual Warfare to over 40 church leaders.

Would you please be praying for the Yanesha, that their spiritual eyes of understanding would be opened and they would see that there is only One God who heals and that there are many spiritual forces of darkness arrayed against the work of Gospel transformation in their communities.

At the end of January, The Compass Church commissioned Matt and Laura Pheneger and their children as they moved to Peru. (You can read about that here.) Transition to life and service overseas is never easy, but the Phenegers arrived only weeks before the worst natural disaster that Peru has seen in 100 years, with unusually high rainfall leading to devastating mudslides. Today, Matt writes about that disaster, and the Hope that is breaking through.

It was a powerful image that was broadcast around Peru and around the world.  A woman who was swept away by one of the mudslides that devastated Peru in March (see video:  http://edition.cnn.com/2017/03/22/americas/peru-mudslide-survivor-video/index.html).  Evangelina Chamorro survived the harrowing ordeal, praying the whole way down.

Tens of thousands are dealing with the catastrophic effects of the mudslides throughout the country.  I traveled 200 miles north of Lima to the town of Huarmey with a group from our church, Camino de Vida.  What I witnessed was nothing I had ever seen before.  The streets had been converted into rivers of mud and water.  Homes were filled to overflowing with that same sludge.  People were living on the roofs of their homes at night and  wading into the muck and mire to shovel the quagmire out of their homes throughout the day.

I also witnessed the Church in action.  Overwhelmed by the extent of the devastation, the government has struggled to keep up with the need.  Churches and individuals have banded together to take on the challenge.  It is going to take weeks if not months to return these towns and their homes and businesses to a sort of normalcy.  Because of what they experienced in the mudslides and the response of the church, though, many people’s lives will never be the same.

The team from Camino de Vida church helping people to remove the mud.

In one of the mudslides up in the mountains above the area where we live, a massive boulder landed next to a home.  Although the first floor was now full of six feet worth of mud, the family was thankful they were spared from the boulder crashing into their home.  Soon after a second deluge headed their way.  This time, instead of slamming into their home, the boulder stood in the way, sparing a potentially crushing blow to the house.  The first mudslide, that brought so much damage, had also deposited the very thing that saved the home from the second mudslide.

In the midst of all this catastrophe, our prayer is that some rocks have been deposited to divert further damage across the country.  Hopefully that is true of physical rocks, but also spiritual rocks.  In the barren terrain across the country, there are very few obstacles to hold back the mudslides that are inevitable when any kind of heavy rain hits. 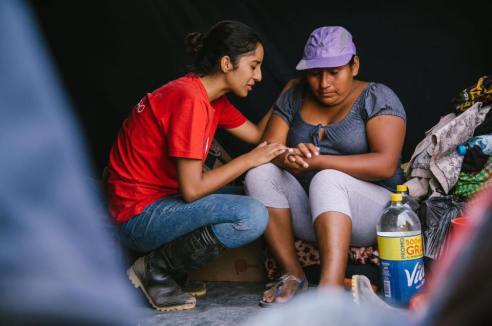 A church member praying for a woman affected by the mudslides

This appears to be the case spiritually as well.  Pray that the Church can be used by God to get outside the walls of their church buildings and begin to impact this nation.  Using the gifts, talents and passions that each individual in the Church has been blessed with to tackle the issues that are overwhelming Peruvians’ lives resulting in fatherlessness, brokenness and desperation.  Pray that Christians from all walks of life will be rocks in the arena in which they have been placed.  From businessmen to teachers to soccer coaches, we all have an opportunity to live for and point people to the only Rock who can be our haven in the midst of the deluge we face in this life & through Him live the life for which we were created.

Gods is doing exciting things in the Latin/Caribbean region, and The Compass Church is privileged to be a part of it! We have 8 singles and families serving in 5 different countries (one for almost 50 years!) and partnerships in Cuba, Haiti, and Nicaragua.

Over the next couple of months we will focus on this region, and even have guest posts from some of our Global Partners! You will be encouraged by the faith of our brothers and sisters living in this part of the world, and be equipped to partner with them in prayer! 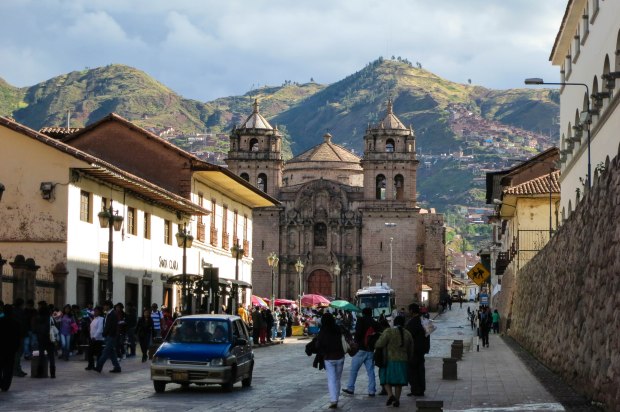